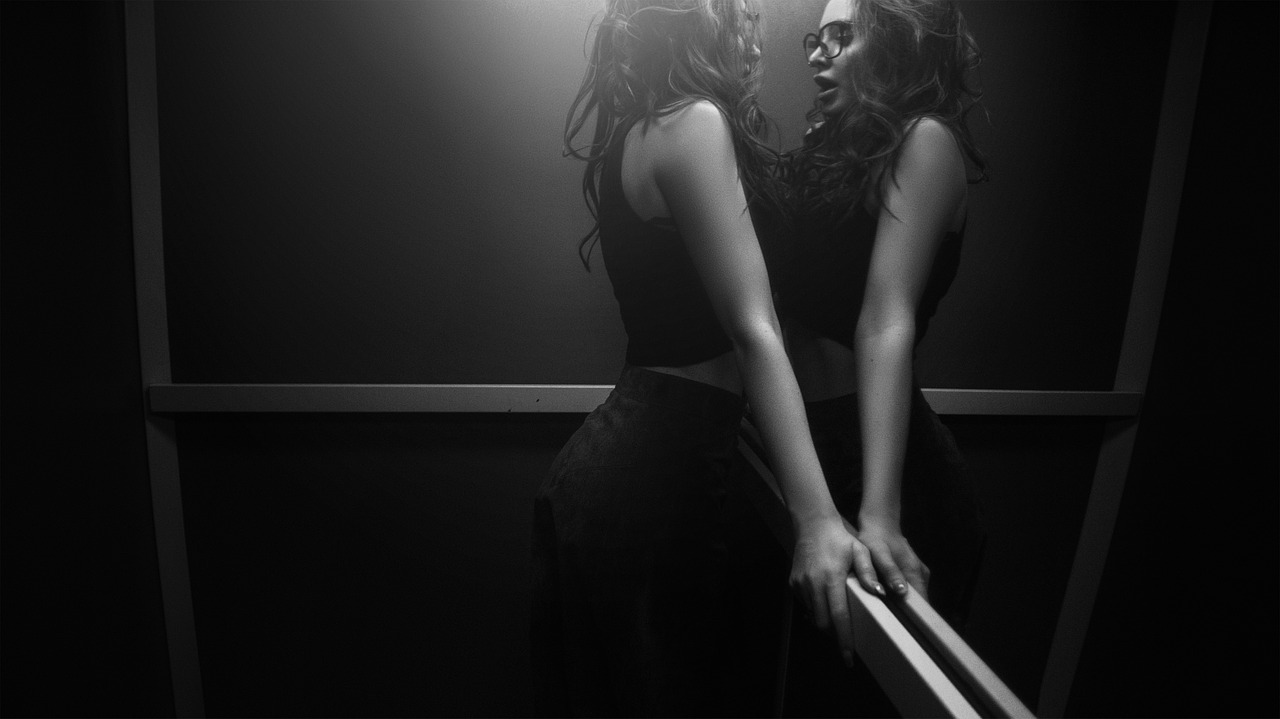 short skirt, and a crop-top with an open belly and my moonshine almost on top, I sat down at one of the hotel restaurants’ tables so that I could be seen clearly, and also that others could see me.

Various people were walking there … I saw both old men who obviously stood at the sight of me, but also younger guys. I could go fuck somewhere with everyone, but today … today I wanted a real hottie.

In the end, he made it. Blond, tall, tight-bodied, with hair tied in a sloppy ponytail. He caught my attention right away, which made me immediately wet. I had no panties, so mucus quickly began to trickle down my thighs.

I looked at him, caught his every glance, and as he stared at me, I spread my legs so he could get a closer look at my pussy. He seemed a bit embarrassed at first, but he was looking more and more often into my large, childlike eyes, at my coral lips, huge tits and finally… wet slit. I gave him a little show, stroking it and playing with my clitoris. At one point his voice broke even as he was talking to his friend.

When he got up, I just waited for him to leave the restaurant. I left the waiter payment with a solid tip. I was in a good mood. I knew I was about to fuck hard.

I followed him. I was walking at just the right distance to discreetly see where he was going. Luckily, left his friend in front of the elevator. The other passed me by, and I went in, just before the door slammed shut. My blonde Norse god looked at me but said nothing having been in similar situations, I knew how to stop the elevator between floors. What I did too. I turned slowly to him.

-What, are you going to just stare like that? Will you finally fuck me like a man should?

– Are you crazy? He snorted and shook his head.

– About your cock? – I grabbed his crotch, and then it dawned on him that I was not joking – Perhaps

I massaged him hard. I felt how his pants fill up with an oblong thick shape.

“I can’t see her here,” I unzipped his pants and fell to my knees. The cock was big. If I put it on my face, it would reach from my chin to the middle of my forehead. It was also a challenge, because it was hard to put my hand around him. I began to lick it and sucked it eagerly. I was rubbing his balls with my hand; he leaned against the elevator railing and grabbed my hair. My red hair tangled with his fingers as he tugged at them, stuffing my lips and throat with his cock.

But it wasn’t supposed to come out in my mouth. I had a different plan for this long fat boy.

I jumped up off my knees and thrust out hard – Just not to my pussy – I gasped.

We looked at each other and laughed. The joker is here. However, his cock wasn’t a joke and he started to push himself hard in my ass. She parted easily in front of him, despite the volume. I felt him penetrate deeply until I started punching myself, moving my body back and forth. He also spanked me, so the impressions were even stronger.

He finally took the initiative. He pressed my face against the elevator mirror and started shoving hard up my ass. I widened it so he could go deeper. His plump, hairy balls pounded against my pussy

as the cock penetrated my ass. It’s been a long time since I had such a good cock, and most of all a partner who could fuck me right.

My legs trembled; my knees buckled at his every thrust. The feeling of pulling my hair increased my excitement. My lipstick smudged on the mirror, and I just tried to look back to see his face. He was really like some Norwegian god, Thor or whatever. A clenched jaw, a cut in his face, a loose tie and shirt … and a great thick handle from his hammer in my ass.

The security guys must have had a lot of fun staring at the cameras as they watched the tiny me get fucked by the big blonde guy. How he demolished my ass with no mercy. If they had a sound, they would also hear my wailing, moans punctuated by a whine, and the steady slap of his hips against my ass. My nymphomania was lifting me to new heights at that moment.

At one point, I didn’t have the strength anymore. Spasms of orgasm have pierced my body many times. Eventually he pulled his dick out of his ass and shot hard at her, at my pussy, and at my back. I could feel his hot sperm on me. I scooped up my hand, looking into his eyes I licked it with delight.