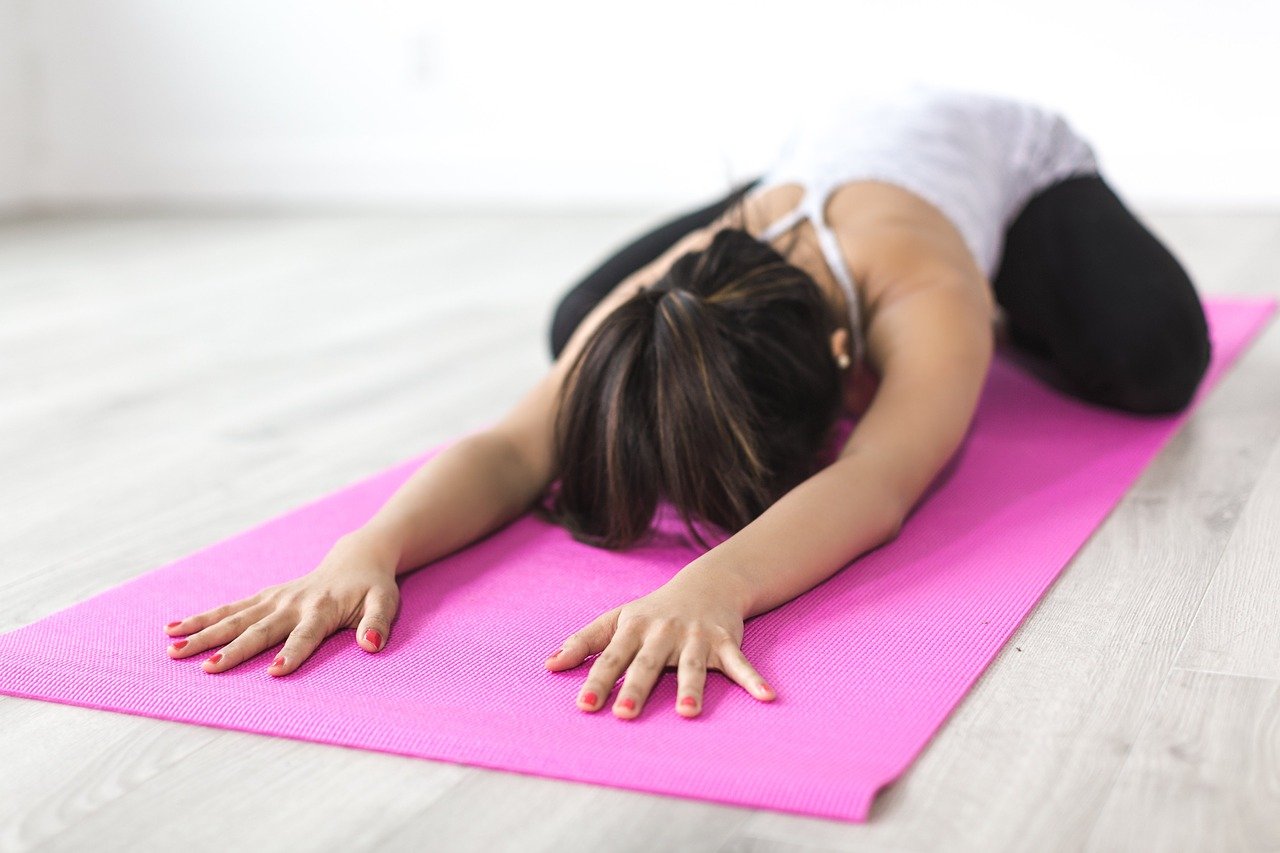 I have always tried to live a healthy life – both physically and spiritually. By exploring various philosophies, I have finally concluded perhaps prosaically, that my body is a temple of the spirit, so it must be perfectly cared for. Yoga has become part of everyday practice. I chose the best school in town, and I loved it straight away. Not only because I always felt super relaxed after each

session. Chris, our instructor with dark, longer hair, lagoon-blue eyes and a male stubble of several days, was devoured by all of us. We made mistakes deliberately, so that he would only come closer to touch us, catch us with those strong hands … He stretched our bodies masterfully, and each wanted him to stretch her deeper …

I watched him carefully during each session. He was muscular, but not like body builder type of

guys. It was an athletic sculpture. Alive, strong and rock-hard muscles made an amazing

impression. Just like his stretch and… crotch. Every girl who went there saw it. He always wore tight-

fitting shorts so that they wouldn’t get in the way when exercising, so you could clearly see what

kind of “gun” he was hiding underneath them.

Once, I had a problem to properly bend my body to the floor. He then came up to me, knelt down behind me when I was absolutely tense, and my imagination was already working. He gripped it over my hips like a mare stallion and pressed it gently but firmly against the mat. At the same time, I felt his crotch against my ass. He was so close then, and I had to act, even though I wanted to press against him, to rub myself harder …

After another training session, he asked me to stay. He invited me to his office when the other girls were leaving. I could see their jealous looks, but… it didn’t have to mean anything more.

– Something wrong with the payments? I asked right away.

– No, no, Irina … It’s not about payments – he smiled slightly – I have been practicing yoga for fifteen years … I can see that you make some mistakes on purpose. More often than other girls …

My mouth opened for a moment; I blushed a little.

“Don’t try to hide it,” he snorted softly. It was not rude, but rather … with amusement – I have been teaching for a long time and I know that women can do a lot to feel a man’s touch … You probably care a lot about it.

I looked up at him. I watched, a little innocently, a little shyly. I figured I would play his card.

– You’re curious, huh? What would it be like, right?

– What if yes? I lifted my chin a little more boldly, peering into his blue eyes.

We looked at each other in silence for a moment until he got up and went to the window. He was silent, and I grew less and less confident, lacing my fingers around my wrist.

“They’ve all gone now,” he said hollowly, and turned to me. I watched him come, grab my forearm and twist me. He rested my ass against his desk. I could feel his male embrace, now with a completely different character. Our faces were close, and it seemed to sparkle between our lips. I looked at him and felt my lips part involuntarily.

The kiss fell like a thunderbolt. He kissed me greedily, passionately, while quickly undressing my clothes. After a while, I was without leggings and without underwear. He with – no shorts or boxers.

“You have strong energy … Let’s find out what energy you got like in your womb,” he said, and I felt a large, hard object hit my mouth. When I looked down, I saw him. Decorated with bumps in the veins, an impressive cock with a powerful head. It looked like a muscular piston. It matched his body perfectly.

I was hot, wet like after a bath, so he slipped in without a problem. I felt it reach deep, open another centimetre of my pussy. I responded by tightening my grip on him.

“Oooh,” he sighed, “I see Kegel’s muscles… for a medal.” He backed off slightly and pushed again, I groaned silently.

“Your merit, Master,” I replied.

“We still need to work on them,” he began to move his hips rhythmically. I wrapped my thighs tight around him, pressing him tightly against me. I wanted to feel a whole cock, deep inside me. It was like madness, like a mania I wanted to indulge in. I ripped off his T-shirt and touched his beautiful upper body, carved like a Greek god’s. He, in perfect harmony, rhythmically, fucked me. At the same time, it all felt different. Sex wasn’t just fucking anymore. There was something transcendental about it, and at the same time… I felt everything with my whole body. Yoga…

The orgasm was the natural consequence of this brief spurt. I squeezed tightly against his thick, wiry penis, clinging to him as tightly as possible. It was beyond my senses, but I especially remembered the smell. He smelled a bit musky, with a hint of sandalwood …